My route over the last 2 days. 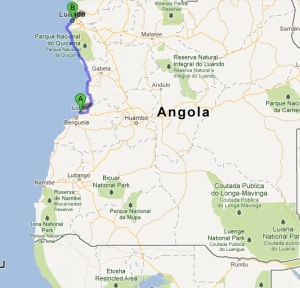 I’ve had 2 very relaxing days in Luanda with my host Ferdie Nell. We were putt in contact through Deidre’s dad. They knew each other from a long time ago back in Namibia.

I got up early saturday morning, packed up my gear and headed for the petrol station just after 6am. I wanted to get a head start on the trucks heading towards Luanda. I’ve been told by Ferdie and various locals that it’s a dangerous, narrow road where the trucks drive like maniacs.

I headed out passing the old ship in the middle of the road called “Zaire”. At the petrol station I met a friendly local guy who spoke english. We had a chat about the trip while I filled up my water bottles. People are starting to come up to me asking about what I am doing and expressing their disbelieve for where I am planning to ride. 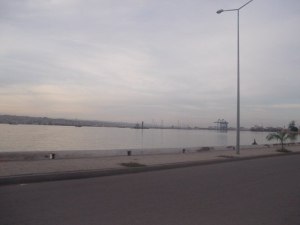 It was evident from the start that I was going to be in for a stressful ride to Luanda. The tarmac is really good but the road is very narrow. The trucks don’t seem to mind they just pass each other at break neck speeds and try to take the paint off each others mirrors.

I had to come up with a plan to make it safely in Luanda. I opted for the “use the truck as a barrier technique” (I invented the move myself). Its were you find a truck with a truck driver that seems to me mad and absolutely fearless. Get behind him, not too close, and watch him scare all the other trucks and push them off the road. By doing so you stay out of harms way and no truck will be pushing you off the road. 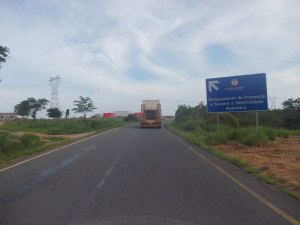 On the way I found some nice palm trees, very pleasing to the eye. 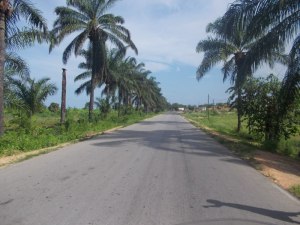 From Lobito to Sumbe is a wonderful ride with rolling hills and many long sweeping bends. From Sumbe the road starts to even out and the straits become a little bit longer. I enjoyed the ride a lot.

As the day went on the temperature started to climb. By 10am I was sweating away in my gear and enjoying the open road with long sandy beaches and open ocean to my left. 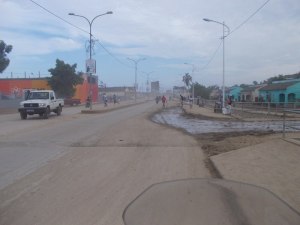 Long winding roads with the ocean in the background. 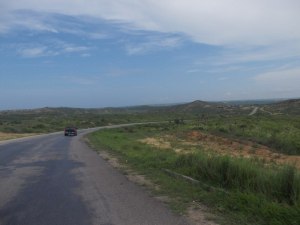 I also had to stop for a break and have lunch. I realised that I havent eaten anything in the last 24 hours. I have been surviving on coke and water.
I stopped opened a pack of biscuit and admired the view. 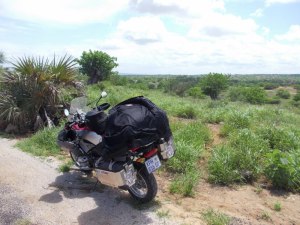 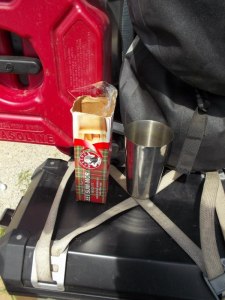 I pushed on, I wanted to get to Luanda fairly early and take in the sites. While driving there I passed the small town of Porto Amboin, I crossed various rivers and also the mighty Cuanza River.

You should have seen the size of the speed humps before the bridge. 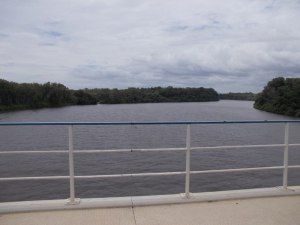 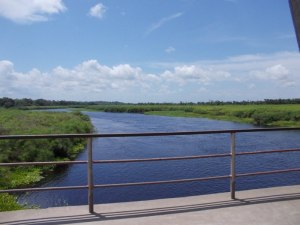 I was told by Ferdie that just after the bridge is a toll gate and that I should have local currency to pay the toll. Luckily i was waved through by the officials and avoided paying the R120 toll. Heading into Luanda is an amazing sight. I didnt know what to expect, what it would look like and even were to go.

The traffic started increasing as we climbed to the top of the hill. As we reached the top I had the most amazing view of the bay and Ponta das Palmeirinhas. The kite boarders were at it in the water, many a 4×4 passed me with surfboards on the roof. I though too myself, what is going on here? This doesnt seems like the scruffy, run down city I was told about…

I passed various luxury vehicles including a Ford Raptor I have only seen 3 weeks prior to leaving SA on the Top Gear Uk show. I must have passed more luxury vehicles in 10km than I would in 50km at home. Land Cruisers 200’s, Lexus 570’s, Porsche Cayenne, BMW X6, Toyota Tundra, Cadillac Escalades… I was trying to work out in my head what I was seeing.

Well run down and scruffy it is, but its a metropolis being rebuilt from the ground up. Huge buildings are going up right next to the old ones. The old ones are just waiting for un upgrade. There are city’s being built in the city, there are marina’s for luxury yachts and big malls built with everything you will find at home.

I was embarrassed when I met up with Ferdie and his mates. My first question was why do you live here? They replied by saying that is a cool place with very little crime and huge potential. Ferdie told me that for 5 years running from 2005 Angola had one of the highest GDP growth rates in the world.

The money Luanda oozes is incredible, it just seems like there is money being poured into anything imaginable. The photos being shown to me of the yachts at the Marina was amazing! The restaurants and houses were amazing, given that they are built right next to a shack. While in the shoprite I saw why it is regarded as one on the most expensive cities to live in in the world. The house I am staying at is being rented out for US$10 000, similar house in SA will rent for R25 000. Its not expensive to eat and survive in Angola but rare thighs come at a huge price.

Rump steak clocks in at a heavy R250 per kilo, 4 mielies(corn on the cob) goes for R150, but then again petrol is only R4.50 a liter, packet of smokes go for R10 and you can buy any car here at a fraction of the price back home as they are directly imported from the country it is being made and there is no VAT on products sold in Angola.

Ok that’s a mouth full, on too more serious stuff! 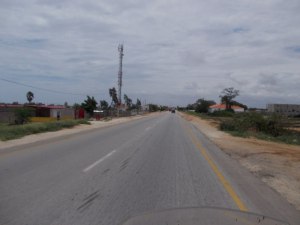 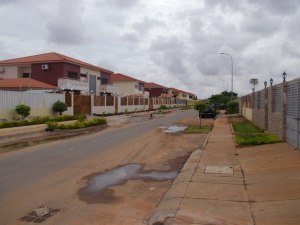 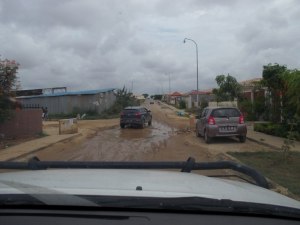 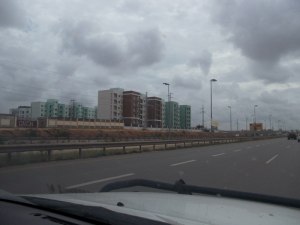 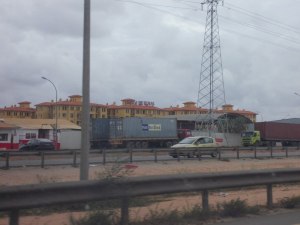 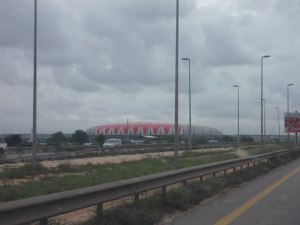 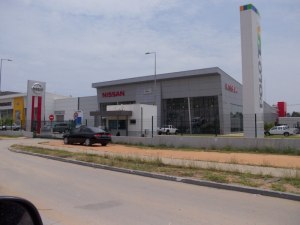 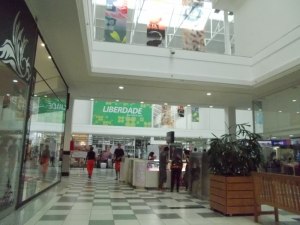 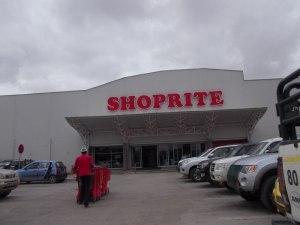 The cars they drive to the malls, I know its corny but its the first Escalade I’ve seen except for 50 cent in a music video! 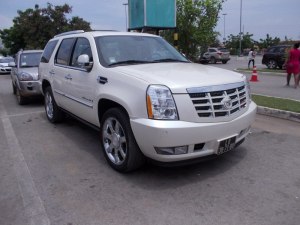 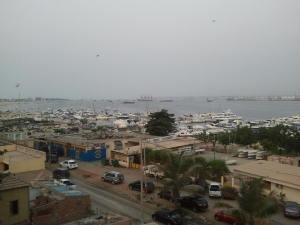 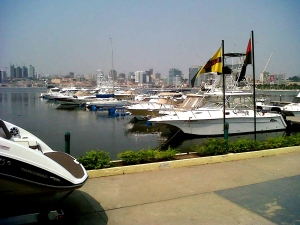 Luanda is an amazing city with a good and bad history, good and bad vibes. I wonder what would have been if they never had a civil war, I wonder what would have happened to SA if we had a civil war. Alls well ends well, Angola is booming. The people seem really happy, the crime I am told is also low, people here are still scared of the police and there is a buzz that cannot be described unless you visit the place yourself.

I am off again tommorow, back on the road. The internet will be hard to find this week but I will try my best to keep you guys updated!

Have a good week, keep me in your prayers and see you in DRC.

10 responses to “Day 9…Luanda- 2nd most expensive city in the world.”