My route over the last 3 days.

Well well well! What a long couple of days.

I left Aqaba to find the ferry to Egypt. I wanted to make sure that the prices Deidre got for me was correct as I found it really expensive! $70 p/p and $210 for the bike. I rode around trying to find the ticket office when I decided to skip the ferry and go through the tedious task of crossing 3 border posts.

First up was to exit Jordan. It was relatively ok but I had to pay $50 tax to exit. Ok done now back into Israel. As I rolled up to the organised but paranoid security they ushered me to the first check. Security. I know the procedure by now and I was still feeling fresh. First step, unpack ALL your gear and carry it 40 meters to the X-Ray machine. Step 2, Emigration. Step 3, Customs Paperwork. Step 4, Security inspect the bike WITHOUT the owner present. So the panels get stripped by non motorbike mechanics. Ok done, pay $30 and you are ready to leave.

I drove 11km to the Egypt/Israel border and did all the exit documentation which didn’t take to long. Now for the infamous Egypt border crossing… I happened to end up on the Sinai side of Egypt and its suited me well. Its not very well worked by overlanders and with this I was hoping that the backhands will be kept to a minimum.

It took 4 hours to get into Egypt. First it was some customs paperwork, stamping of the Carnet and then eventually traffic department for numberplates and I was done. I had to walk twice to the Taba hotel to make photo copies but all and all quick considering all the horror stories out there. No backhands where paid and I got through all in for $80. 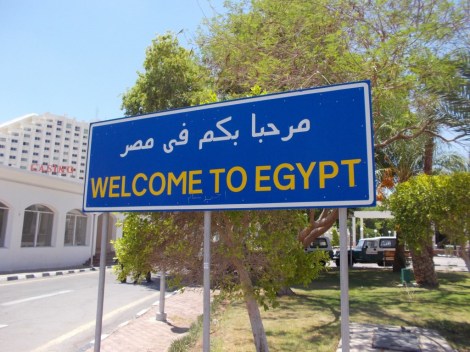 I drove 20km down the coast and found a small campsite with bungalow’s for $2.5 a night. Bargain! Another bargain was the fuel price. At $0.2 per liter it was 10X cheaper than Israel.

I was treated to a wonderful Egyptian meal and called it a night.

I awoke this morning just before 5am and was on the road by 5:15am. I wanted to take the Taba-Suez road but was turned back by the police. The road was closed. I had to take the Sharm El Shaik road round to Cairo. It was a 350km detour.

I passed about 50 resorts that were absolutely deserted all along the coast. Built and ready to go and half built. The tourist have stopped coming. 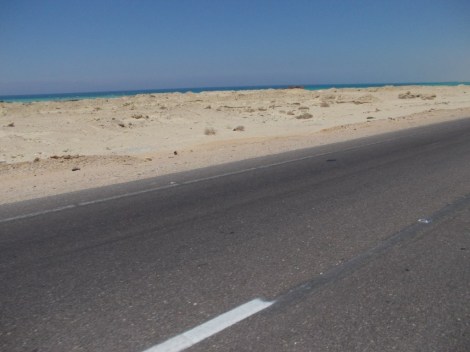 Nonetheless I was off fighting the worst headwind to date and on my way to the crises ridden capital of Egypt. The road was ok, not the Chinese roads in West Africa but it did the job. The other thing that wasn’t that great was the driving for the locals, at one stage I passed a bus that was on my side of the highway. I thought that his side of the highway must be closed but when another bus passed on the otherside I knew that the driver was just a dumbass.

I pushed on only stopping for fuel and eventually got to the outskirsts of Cairo. The traffic started mounting and before long the Egyptians turned a 5 lane highway into a 10 lane roller coaster. Cars hooting and passing you with millimetres to spare. Shit! It was the first time a grew a pair of eyes to the back of my head to try and stay alive.

I took so little photos as all my concentration was on the road. I didn’t take any video as every 20km there was a military check point. After 3 long hours of fighting to reach the Giza Pyramids as was turned away as it was closed. After trying to negotiate with the guys to let me in to take a photo several touts surrounded me and demanded that I pay them a 100Euro to take a picture. One jumped on the left panniers and others tried to stop me from driving off. At times like this you wonder why the tourists stopped coming… Fuckin disgraceful!

So the only pic a got was this one.

I was totally smashed and so tired. My clothes soaking wet and starving for something to eat. I checked the GPS and found a campsite 6km out of Giza. I pulled in and called it a day!

My caravan for the night

SO after a disappointing day I am hoping to leave again at 5am and try to get another pic of the Pyramids. If not then so be it, Its not like I have to lick there arse to say that I was in Giza.

Have a goodnight. See you in Southern Egypt

Cheers
Riaan
Giza, Egypt (Where the Pyramids are apparently)

Road: Tricky, really bad driving from the locals.
Border: 515EP for Customes, 65EP for Traffic and 57EP for Insurance. No bribes!
Cairo: Its tense here, the people are hungry for tourists so its a mission getting anything done without being harassed.