I left Lucca with a heavy heart. Deidre left the night before and all of a sudden the lonely blues returned. It must be the hardest part of such a journey, the time alone.

We spent a lovely couple of days with Frederico and Bruna. They looked after us so well!
Italy was fantastic. Expensive but it lived up to every expectation that we had.

Nonetheless I was up early the next morning and repacking all the gear that has been in storage for the last 5 weeks. After a quick breaky I was off, direction Sorrento. I opted for the motorway as I figured out how not to pay the tolls and I had 650km to cover and didn’t want to waste time on the coastal roads. Yes they are nicer, I know, but so have all the other coastal roads been.

I have clearly escaped the cold European summer as the temperature was over 30 degrees and the sun was beating down on my already faded jacket. The only breaks taken were at the fuel stops and that’s also when your wallet gets broken by the Italian fuel price. At 1.88 Euro per litter you don’t take the back roads, easy on the throttle when taking off and slow controlled overtaking on the highway! 🙂

I reached Sorrento late afternoon and headed for the campsite where I planned to spend the night. 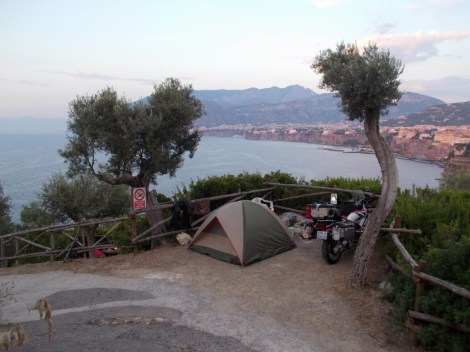 It was a quite afternoon with only spaghetti and tomato sauce for company.

The next morning I was up early and headed off towards the port city of Bari.

The road was quick, only 280km. I struck some luck when I arrived at the ferry ticket offices. They had a ferry departing in 1:30 hours. I paid the fair and loaded the bike on to the ferry and got myself a seat for the 18 hour sailing.

I thought this was my boat, but I was mistaken.

This was however the one. Bike strapped up.

Clear blue water of the med 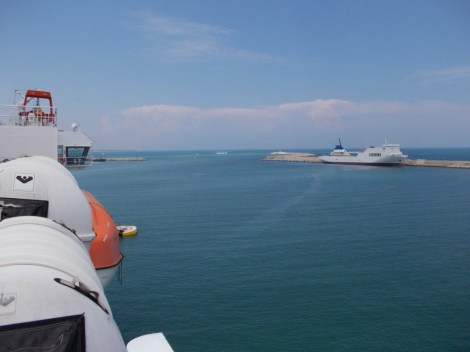 My seat for the next 18 hours. 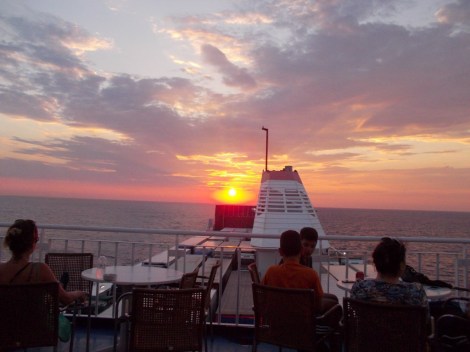 It was a painful 18 hour sailing. There was no entertainment as I took the ticket without any entertainment but I downloaded some BBC earth documentaries to my Ipad and spent the afternoon in the company of David Attenborough and the ever melting Artic circle. I did at one stage go to buy a beer. I was asked “tourist or truck driver” I obviously said truck driver but the bar man wasn’t convinced and demanded my “card”. After flashing my drivers license at him he said sorry 6 euro. yes 6 euro for one beer. Stupid!

So walking back I spotted a lonely truck driver and made friends. He bought me beer at “truck driver” price of 3 euro and also made sure that my dinner was half price aswell.

After finding a coach in the now empty restaurant I settled down to the rumble of the diesel engines and fell asleep.

We arrived at the port of Patra at 7:30am and a few minutes later I was in Greece. Immediately things changed from western Europe. The roads weren’t as good and the place looked pretty run down. I guess that’s normal when your country is bankrupt. Nonetheless I had a quick dash to Athens and found the campsite. After pitching the tent and going through the motions of setting up I was off to Acropolis, the main attraction of Athens. 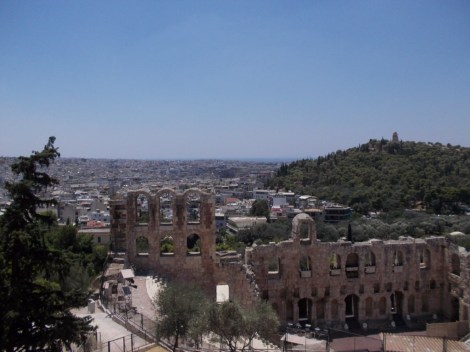 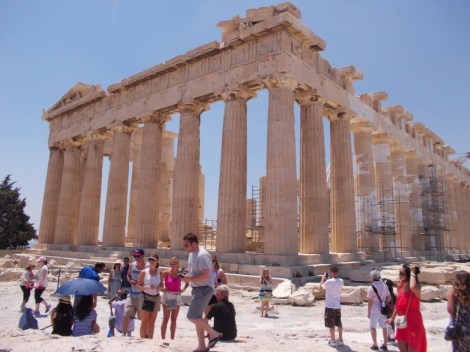 The Acropolis of Athens is an ancient citadel located on a high rocky outcrop above the city of Athens and containing the remains of several ancient buildings of great architectural and historic significance, the most famous being the Parthenon. The word acropolis comes from the Greek words ἄκρον (akron, “edge, extremity”) and πόλις (polis, “city”).[1] Although there are many other acropoleis in Greece, the significance of the Acropolis of Athens is such that it is commonly known as “The Acropolis” without qualification.

While there is evidence that the hill was inhabited as far back as the fourth millennium BC, it was Pericles (c. 495 – 429 BC) in the fifth century BC who coordinated the construction of the site’s most important buildings including the Parthenon, the Propylaia, the Erechtheion and the temple of Athena Nike.[2][3] The Parthenon and the other buildings were seriously damaged during the 1687 siege by the Venetians in the Morean War when the Parthenon was being used for gunpowder storage and was hit by a cannonball.[4]

Yes that was from Wikipedia.

I walked around the bottom of the hill to find a souvenir shop for a Greek flag and found some really bizarre stickers and stuff to buy.

This is at the bottom of the shelf, where the kids can see it. You should see what’s higher up the shelf’s.

Anyways I bought a fantastic Souvlaki and headed home to shelter from the midday sun.

There was however 2 things that were running non stop through my mind. 1. How to get to the otherside of the Med. 2. With all the events in Egypt, will it be ok to travel through?

The next day I went to a BMW workshop recommended to me by a few people. After closer inspection the owner told me that there was a bearing that’s faulty in the diff. Also that my clutch is very tight, seemingly close to the end of its life. I then gave them the go ahead to replace both.

Again work on the bike. 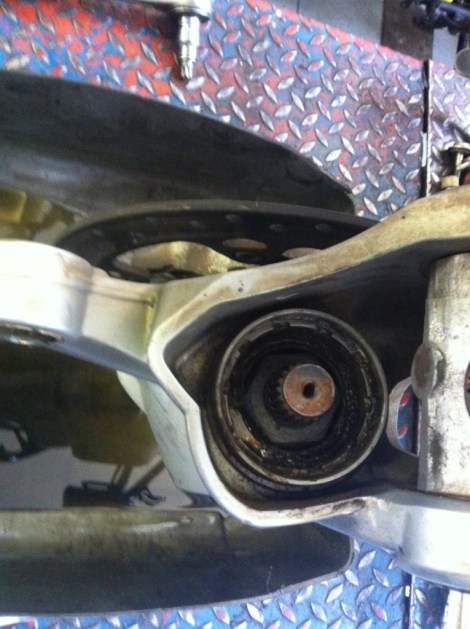 After 3 days in the workshop and 800euro’s later I got the bike back. All seemed ok when I left but the vibration is still there. The clutch still had 30% life left and would have gotten me home but I am glad I replaced it. The vibration that the bearing change was supposed to cure seems better. I am just hoping that it is the tyres that are scalloped as it sounds like a tyre noise now. So after officially using my whole trips budget to date I am slightly worried that the few bucks I have left will get me home….

I had a great time though with the family that owns the BMW workshop. Started in 1946 by the now owner’s father, its still going strong.

Bottom left is the now owner with his father fixing bikes at a young age.

The team that hopefully fixed my bike.

I left Athens this morning and arrived at Lavrio the port town where my bike and I will hopefully be loaded on Monday for the 3 day sail to Isreal. If there is no space for me I will have to take a flight to Isreal and then continue. The boat/ferry is the only one leaving for Isreal and at 500 euro’s its not cheap.

So I have made the campsite in Lavrio my home for the next 2 days. Its not so bad.

Also I got a set of Karoo 3’s for the infamous Moyala-Isiolo road in northern Kenya. My Anakee’s wont make it all the way so I decided to get some more offroad tyres for the last leg. Also trying to figure out if the tyres will make the 300kg beast handle better in the sand and mud.

So from me that’s all. Its been a really boring week. I am dying to get back to Africa and on the road back home.

Have a good weekend.

9 responses to “Day 127…Greece- Repairs, Waiting and Longing the dust of Africa.”