My route over the last couple of days.

Leaving the Sleeping Camel was an early affair. I got out of Bamako at 7am and filled up the bike and all auxiliary fuel cans. I was taking a new road from Bamako to Kenieba, the border crossing with Senegal. Its a new tar road and not listed on Michelin map. Jolandie Rust also doing her own trip around Africa advised me of this route. Its nice and quite with only a few trucks passing by.

I left Dave in Bamako as he needed a visa so I took the road alone, very excited to get to Dakar. The road was quite boring with good tarmac. I got the bike back up to speed and decided to sit down and get some serious miles behind me. I had 12 hours to get to Tambacounda which was 850km away.

The road was long and the arse was sore. I was only stopping between refuelling stop so sat for 2.5 hours at a time. I got to the border with Senegal and the formalities were quick and no different to the Senegalese side. After 30min I was blasting down the road towards Tambacounda.I settled for the Lonely Planet suggestion Bloc Gadec. It was pricey and basic but clean and had free wifi. 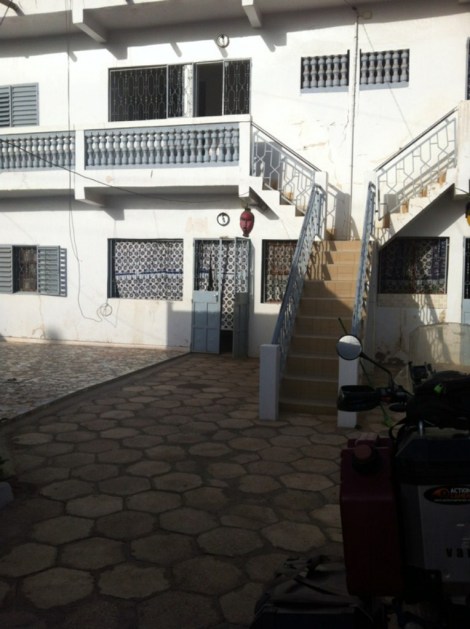 I got on the road early again, trying to push the last 470km to Dakar. My experience with Senegal wasnt the greatest affair the first day. The people were quite rude at the water stops and the cars drove like absolute idiots on the potholed sections of the road.

I was quite apprehensive about Dakar and didn’t know if I wanted to spend time there anymore. I hate the big West African cities. They are dirty, clogged with traffic and unfriendly people. I thought I’ll check it out and head towards Lac Rose if I didn’t fancy the city.

Well the last 150km before Dakar is terrible, with potholes running across the road. The cars and trucks swerving into you lane to avoid the potholes and temp levels at 40’C. To make it worst the traffic started 150km before Dakar so the journey in took HOURS! I was tired and the bike even more so as the temp gauge climbed at every jam!

After hours of inhaling diesel fumes and bumping busses and trucks with the panniers I was rewarded with the number one campsite on the trip so far! Sunugal Restaurant is on the beach and owned by an elderly french guy. He seems to love overlanders. He charges CFA5000/R100 for camping per night. He has a huge parking area and blocked of a section for campers. Its nice and private and you open youre tent to waves breaking in the distance. The temperature is great, as the cold wind blowing in from the Atlantic is nice and cool and guarantees a good nights rest! 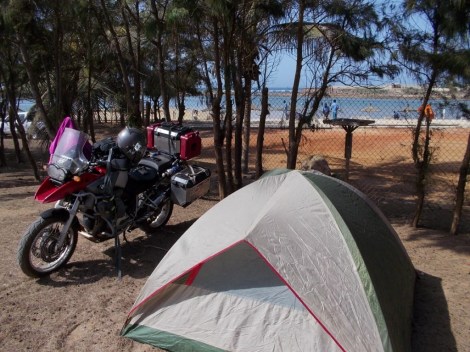 He also made me a deal. “if you eat for CFA8000 the camping is free”… So after making sure I understood him I realised its an absolute bargain. I will eat a 3 course meal every night and camp for free. The nett effect is only CFA3000… Thats what fish and rice on the street prices at!

I settled in and took a drive to the most western point on the African continent Pointe Des Almadies. I had a beer and promised myself to come and try the fish tomorrow for lunch. I sat out there for 2 hours just reflecting on where I am. It felt fantastic!!! 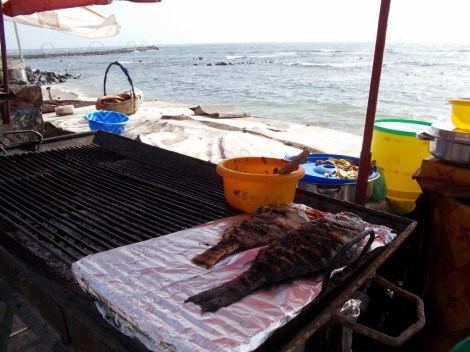 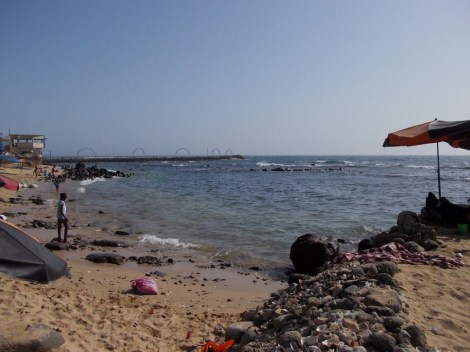 Some guys playing music came around and tried to impress tourist with their version of Shakira.

I came back and settled down for my 3 course dinner. It was spectacular to say the least.

The Dj’s were hard at work setting up huge speakers 30M from my tent! 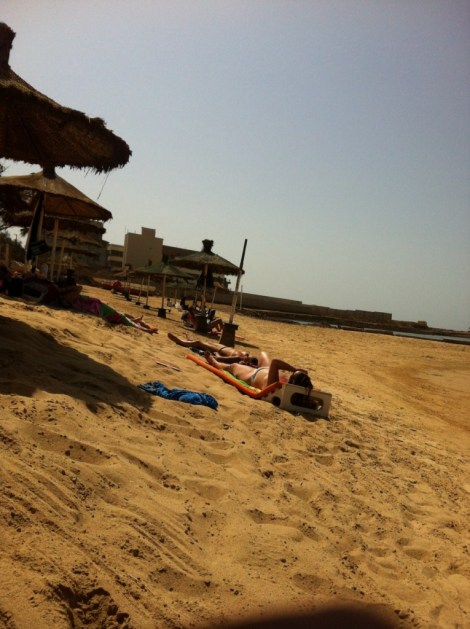 It’s safe to say at 6am this morning the last party animals left. I am just about ready to grab lunch.

Be ready for another post soon. I am hitting the town today!