My route for the last couple of days. Today one month ago I left JHB.

When I left Yaounde I realised that my job on the valve clearances wasn’t quite up to BMW spec. The engine was so noisy that over all the traffic and hooting I could hear the engine cluncking away! I pulled up to a small car workshop to look for a mechanic. I knew what I did wrong, I didn’t get the piston to TDC when I adjusted the valves. I needed an assistant to help me find TDC so that the valves are closed when I adjust the clearance… Ok you are yawning!

Anyways I hooked up with Fidelis and he was a sharp mechanic and helped me sort the problem out. 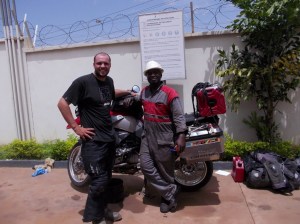 He wanted to get his shop in.

Anyways we sorted out the problem and I was off. It was a boring ride with me only looking out for cars and trucks trying to kill me. Good tarmac in Africa doesn’t always spell : “easy travel”

I entered Douala tired, hot and sweaty. I stopped outside the city at a petrol station to grab a bite to eat. I had a chat to the locals and they advised me of the best road through town.

It was only 300km but I was tired when I arrived. The road from Yaounde is a death trap with trucks and cars speeding along at break neck speeds. I was forced off the road 3 times, the cars/trucks that came from the front in the wrong lane simply flash their lights to let you know they have no intention to go back in there lane and I should better get out of the way if I don’t want to look like the various pieces of scrap metal cars laying next to the road.

I entered Akwa a suburb of Douala and starting looking for the Catholic Mission where I planned to stay. After my visa got declined for Nigeria I decided to re-apply for it in Douala. After 2 hours of driving up and down and following the “ yes I know the place” people I arrived to a pleasant, clean and well setup mission in the middle of town.

I chilled the weekend as the embassies were closed. I had a walk in the streets a couple of times, had two attempted muggings, the A/C is my room never worked as the power was always off and thought better to move to the Foyer Du Marin. It was double the price but I thought I’d treat myself to cold beer, a pool and good food and company! 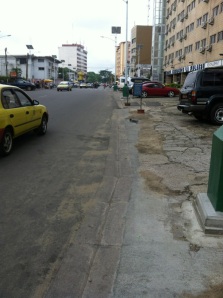 The pics aren’t great but the people don’t like it when you take pictures over here. 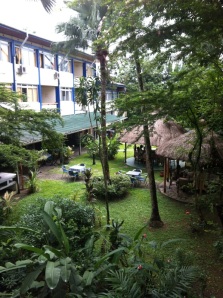 The life I would say for an adventure biker… While walking through the Foyer I found this sad-looking KTM 640 ADV. I walked around it trying to find a sticker with a website on or something that could trace me to the reason it was standing there.

I however found out and it’s not all that exciting. The guy just left it there saying I will fetch is later after he rode around Cameroon. Its been here for over a year or something…

I have been relaxing at a huge expense the last couple of days. Hence the blog being so slow. I don’t really have much more news.

I am however in a bind with the Nigerian visa. I will give it one final shot tomorrow, after they told me today that they can’t help me. I have been making alternative arrangements to ship/fly the bike around Nigeria. It not quick by ship and not cheap by air. I think the shipping option was destroyed today when they told me it will take a month to arrange the shipping and I was quoted one-third of my total budget for West Africa to fly the bike past one country.

What can I do, the trip must go on… will have to sleep in the dunes of Mauritania and Morocco the rest of the trip to recover some of the expense. Doesn’t sound that bad does it?

I am off to have dinner and a beer at my local viewing deck with Mt Cameroon in the background, reflecting on the trip to date. It has been easy, with huge frustrations. Cameroon has depressed me beyond believe with all the visa problems, attempted muggings and loneliness but it has also brought back my fire inside to move on and tackle the rest of West Africa.

Yes I am having dinner here tonight.

I am just as anxious as you are for some better and more exciting news and pics from West Africa. Hopefully by next week we will be in Benin and Togo.

Have a good one!